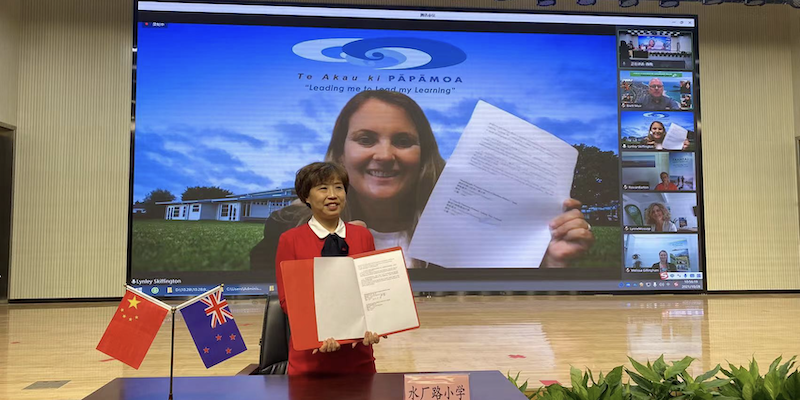 Four local primary schools recently participated in an online signing ceremony with their new sister-schools in the Qiaokou Distict of Wuhan, China. This partnership agreement was facilitated by Education Tauranga and an offshore agent, Sophie Wang from Sunsmart International.

Education Tauranga’s connection with Wuhan city and the Qiaokou District began four years ago in 2017, when a sister-school relationship was established between Oropi School and Shiyan Primary School. Over the next two years, a series of online cultural learning programmes were exchanged and four Chinese student groups visited Tauranga schools on study tours. In 2019, Tauranga hosted an Education Delegation from Qiaokou District at the University of Waikato campus. This was later reciprocated by three separate visits to Wuhan city by Education Tauranga delegates and NZ primary school groups.

It is through the promotion of these sister-school relationships that we can continue to build understanding and friendship between our two countries. Education Tauranga’s role is to help foster these relationships and support young people to contribute as active global citizens. It is important to provide opportunities for cultural interaction and exchange, despite closed borders, and the online signing ceremony was an excellent way to ensure that Tauranga’s relationship with China stays strong and continues to grow.