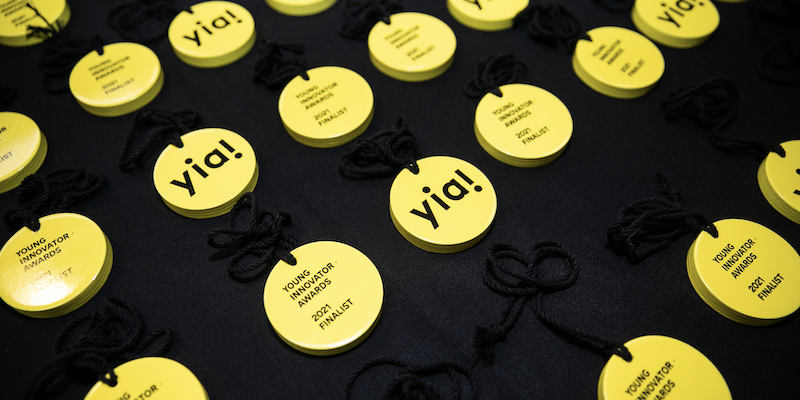 For the eleventh year in a row, the Young Innovator Awards (yia!) have provided local students from across Tauranga Moana the opportunity to develop a unique innovation to make the world a better place.

For many Year 7 to 11 students, yia! is the highlight of the school calendar, giving our upcoming young innovators, entrepreneurs and game-changers the opportunity to present their creative solutions to real-world problems based on their own experiences or passions.

This year has been the biggest yet, drawing in more than 300 individual and team entries, of which 56 finalists were selected to progress to the finals. The finalists came together to attend workshops with local innovators to develop prototypes for testing and feedback.

The competition culminated at the yia! Awards Night on Thursday, 28 October where all the finalists were celebrated and the winners announced for each category.

Head judge, Jono Jones (Chief Product & Innovation Officer at Bluelab) said it was exciting to see so many students and schools engaging in problem solving with an innovation and design mindset.

“We’ve seen a significant increase in students and teams entering this year which demonstrates the level of engagement. There was a very high calibre of thinking, which we were lucky enough to judge.

“The judges recognised how mature some of the problem spaces were that the students were tackling. The amount of work they’ve dedicated to researching, developing prototypes, testing and refining their innovations is huge. Every finalist was a worthy winner – the judges had some really tough decisions to make on the day! We’re excited about the next generation of talent coming through.”

Guest judge, Sarah Stevenson (Portfolio Manager, Bay of Plenty District Health Board) was impressed with how many innovative rangatahi there are from local schools and believes the future looks bright.

“It was awesome to be invited into the minds of young people for the day. I was so impressed with the entries that really took the time to match the problem with the solution and how they incorporated customer and/or user views. One entry had a survey that yielded 500 responses – that’s an amazing achievement!”

Sarah’s advice for students considering entering the awards next year: “Work through the steps, don’t be tempted to jump to the solution too early. Hold your initial solution or prototype loosely but be open to throwing it out or changing it when it’s not quite fitting with what you’re trying to achieve.”

International guest judge, Brian Glynn (Senior Director of Business Development at Trōv, based in San Francisco), took care of the category judging and was similarly impressed with the standard of entries. “The innovation on show would put to shame some of the Silicon Valley pitches I’ve seen over the years.”

Brian spoke at the Awards via video link and emphasised how important it was for innovators to have range; to be as comfortable “talking to a room full of people as they are managing a spreadsheet.” This handily underlined the importance that Priority One places on transferable skills and encouraging our rangatahi to position themselves to be adaptable for the changing world of work.

New to the category awards this year was the Social Impact Award, sponsored by Tauranga City Council. The award acknowledged entries that embodied social impact in a meaningful way to make a difference in the community.

The inaugural winners were Estee Taylor, Victoria Geck and Genevieve Kennerley from Otūmoetai College. The council was so impressed with their mental health support idea that they have offered to host the students for several days to work with the team to make their app a reality.

yia! was founded by Priority One’s Instep programme, aimed at providing opportunities for budding business and social innovators to connect with some of Aotearoa’s best in sector.

Shane Stuart, Innovation Manager at Priority One, believes the level of creativity and innovation coming through in the next generation puts our region in good stead for the future.

“The standard of entries was exceptionally high this year,” said Shane. “The students have impressed everyone. I think we’re in good hands in terms of the next generation of leaders and innovators, as well as the schools and teachers supporting them.”

yia! would also not be possible without the support of our excellent Awards Night venue, Classic Flyers (great venue for work functions by the way!), Salina Galvan Photography, Audio Solutionz for sounds and lighting, and David Recordon from Recordon DP and Videonow responsible for much of our video content, including the Awards Night livestream.

The 2021 awards, held at Classic Flyers, was delivered under Alert Level 2 restrictions, with 170 people able to attend on the night. It was also live-streamed on YouTube for those who couldn’t attend in person, with approximately 270 tuning in on the night. MC for the evening was former Otūmoetai College graduate, entrepreneur and founder of Nude Greens, Alex McCall.